A land of extraordinary cultural mix, and of powerful beauty.

Ethiopia is a country of rich heritage and history. It is Africa's oldest independent country and second largest in terms of population. Apart from a five-year occupation by Mussolini's Italy, it has never been colonised. 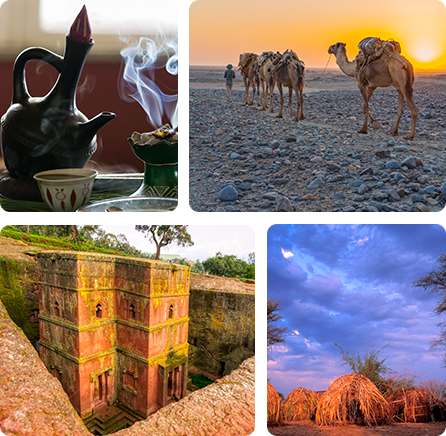 It has a unique cultural heritage, being the home of the Ethiopian Orthodox Church - one of the oldest Christian denominations - and a monarchy that ended only in the coup of 1974. Christianity and Islam are the two major religious communities, with a small proportion of traditional religions and faiths. There is also a small but sizeable Jewish community.

Ethiopia is the spiritual birthplace of Rastafarianism, or the Rastafari movement, which is based out of the town of Shashemene, although the history of the religion in Ethiopia is very recent (the late 1940s).

Ethiopia has been a beacon of African independence throughout the continent's colonial period and was one of the founder members of the United Nations and the African base for many international organisations.

Ethiopia boasts of many UNESCO world heritage sites. Many of these protected sites not only opens the door to Ethiopia’s past, but also helps us decipher the history of the world and mankind’s evolution as a species.

Important cultural sites include the ancient ruins of Axum with its towering monolithic obelisks; Gondar ‘the Camelot of Ethiopia’, home to the ruins of the fortress-city of Fasil Ghebbi, with castles of Ethiopia’s emperors during the 16th and 17th centuries; the Rock-Cut Churches of Lalibela ; Harar Jegol, the 13th Fortified Town and so on.