The Arab world’s love affair with coffee began in the 6th century.

Ethiopia annexed and ruled Yemen for half a century in the 6th century and it was during this period that coffee spread to the Arab peninsula. Sufi monks drank Qahwa, the wine version of coffee to stay awake for late-night prayers. The word coffee was derived from the Turkish word Kahve which in turn was derived from Qahwa. 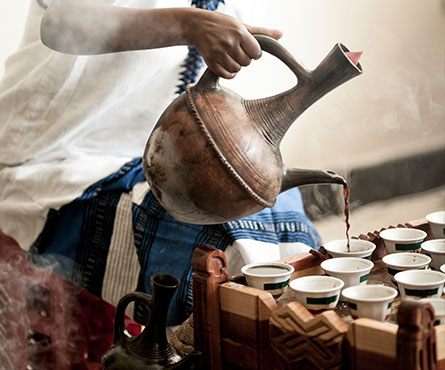 On the Arabian Peninsula, coffee was initially used for medicinal as well as religious purposes. Soon it became part of daily life. The rich had dedicated coffee rooms in their homes for elaborate coffee ceremonies. Coffee rooms gave way to coffee houses. In the 15th century, Muslims pilgrims spread the coffee culture and it quickly became an important trade item throughout Persia, Egypt, Turkey, and North Africa. By the 16th century, coffee and coffee houses became the norm throughout the Islamic world.

During the fifteenth and sixteenth centuries, the Ottoman Turks controlled the coastal city of Mocha in Yemen along the Red Sea. In America, the word "Mocha" is synonymous with coffee, and more recently, has been used to describe the combined flavors of coffee and chocolate. In its day, Mocha was the only port from which coffee was exported. From Mocha, the coffee was shipped by sea to Suez, where it was transferred to camels and transported by land to Alexandria.

From there it made its way it's way to markets in the rest of the coffee-consuming world. The Ottoman Turks dominated coffee production and exports, and they closely protected their plants and seeds. No plants or raw beans were permitted by law to leave the port without first being roasted to prevent them from being cultivated elsewhere.

However, the Ottoman Turks could not hold onto their monopoly forever. The attractiveness of the product made some people go to great lengths to attain it for themselves and for the rest of the world. In the seventeenth century, a Muslim pilgrim smuggled beans back to southern India where the plant was cultivated, establishing southern India as a coffee-producing region.

The Dutch smuggled a tree from Aden to Holland. From that tree, the Dutch introduced coffee first on the island of Ceylon (present-day Sri Lanka) and then later on the island of Java (Indonesia). It is thought that much of the coffee we drink today comes from the offspring of that single plant.