We care about the plants and harvested them by hand. 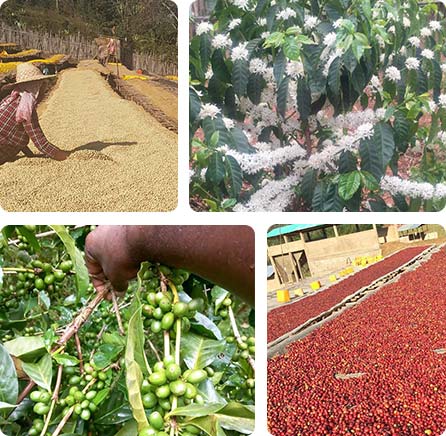 Bale Mountain is located in the “new” administrative area of West Arsi, formerly part of Guji. It is a relatively new farm, owned by Israel Degfa. With recently planted coffee bushes, they are just coming into full production.

At present Bale Mountain processes only naturals that are truly distinct and unique. This area is relatively new to coffee comparing to the south, but there is a lot of expansion. Currently, investment and expansion are targeting only the highest quality coffee.

The farm sits on a 1900-2000 (Metres above sea level) land with around 100 hectares under coffee production.

Bale Mountain farm grows a mix of local varieties from the research centers and indigenous forest varieties that have been transferred to small family plots. The varieties are referred to as Ethiopian Heirloom, which is a mix of local native Typica hybrids, and new and improved varieties of old strains.

Harvesting of Coffee cherries is a family affair, then hand sorted to separate unripe and overripe cherries before they are dispatched to the washing station for processing.

When producing naturals, the level of fermentation will be determined by the thickness and layer during the first days of drying with respect to temperature. Fermentation is slower at higher altitudes due to low temperature.

The cherries are dried at a thickness of 3-4 cm in the first few days. The layers are built up to 6-10 cm after a few days. The coffee cherries are whisked using hands every now and then and will be covered during the hottest hours of the days to protect the cherries from intense sun rays and again at night to protect against humidity. This assures quality as the coffee is rested and drying is more or less equal. Drying in these altitudes takes up to 20days.