Ethiopia is considered the birthplace of coffee. 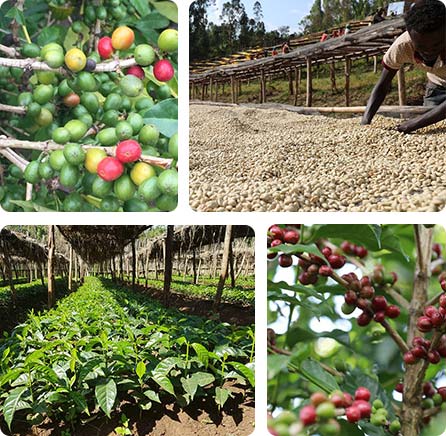 Named after a tribe of the Oromia people, Guji is one of the zones of the Oromia region of Ethiopia. Guji is surrounded by Borena in the south, by the Southern Nations Nationalities, and Peoples Region on the west, on the north by the Ganale Dorya River which separates it from Bale and on the east by Somalia region. The highest peak in this zone is the Mount Dara Tiniro. Major cities and towns in this zone include Nagele Borana the administrative center.

The Oromo people tribes of Guji regard their region as the nerve center of Oromo culture. The ceremonies, customs and wisdom that come with the Gada age group system are still widely followed among the people. Besides the system, coffee farming is ingrained in the Guji culture- the two are inseparable.

In terms of topography, culture, and flavours, coffee from Guji has a distinct terroir while sustaining the classic characteristics like the Aromas of sweet peach and chocolate. A very big, bold character with a smooth, chocolate mouthfeel. Spicy, exotic, and clean.

Previously, Guji produced both washed and naturals exclusively, but of late producers have started to offer honey’s as well.

Guji coffees offer a composite, yet balanced cup profile that blends with both filter and espresso.