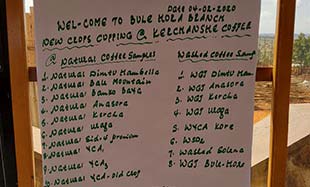 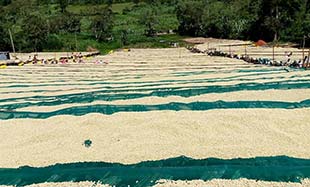 Kilenso Mokonisa is one of the smallest villages in the Guji Bule Hora Oromia Region of Ethiopia. Part of the West Guji Zone, Kilenso Mokonisa is bordered on the south by the Dawa River which separates it from Arero on the southwest by Yabelo, on the west by the Southern Nations, Nationalities, and Peoples Region and Gelana Abaya, on the northeast by Uraga, and on the east by Odo Shakiso.

Part of the West Guji Zone, Kilenso Mokonisa was bordered on the south by the Dawa River which separates it from Arero, on the southwest by Yabelo, on the west by the Southern Nations, Nationalities, and Peoples Region and Gelana Abaya, on the northeast by Uraga, and on the east by Odo Shakiso. The largest town of Kilenso Mokonisa is Bule Hora Town, formerly called Hagere Mariam. Most communities in the region still live in the villages and make a living from farming. Coffee is the chief cash crop for most families in the Kilenso Mokonisa village, who grow coffee alongside food for consumption, and other cash crops such as the Ensete ventricosum (Ethiopian banana) and Brassica carinata.

Our CEO Mr. Israel Degfa with years of experience in the coffee industry understood the eagerness of the Bule Hora communities towards growing coffee, decided to establish a coffee processing site called Kilenso Mokonisa.

Coffee from Kilenso Mokonisa was earlier categorized under Sidamo coffee which is a wide geographical classification encompassing much of central and southern Ethiopia.

After the establishment of the processing site in 2014, Kilenso Mokonisa and other Guji coffee has found popularity and especially Kilenso has become a customer favourite, due to its unique flavour profile.

The main intention of Mr. Degfa while establishing the processing station was to introduce and train modern agronomic practices and implementation techniques like hand weeding, nursery preparation ,organic fertilizer application ,fencing , pruning , stumping , thinning and runoff controlling to the otherwise traditional farming community. The community have hugely benefitted by the knowledge on strong non -convectional agroforestry practices and domestication on economically important plants to improve their livelihood.

Moreover, the farms protect forest and other natural ecosystems under conservation management, in conformance with the certification standards. Moreover, the famers are trained on the effects of hunting, deforestation, soil and water conservation, optimum water (irrigation), shade and disease prevention methods.

Mr. Israel Degfa also believes in providing ample support in other aspects of the community wellbeing, under which an elementary school from grades 1 to 4 was established at Saraji Abude Madana Kebele and financial support is provided to an orphanage school in the neighbouring village.

The natural process means that the beans are left to dry in the cherry after it is picked. This is a tricky process to do as well, as the beans need to be turned over for a consistent and even drying. If some cherries are not dried it will give a moldy flavour to the cup as well as over fermented flavours. But when it is done well, it gives a sweet cup and a bigger body. In the case of Kilenso the natural process is what enhances the blueberry mousse character in the coffee.

Kilenso Mokonisa processing site has a wet mill with a capacity to produce 30Bags/hour. Each day, carefully hand-picked coffee cherries collected from farmers are delivered to the Kilenso wet mill and are hand-sorted prior to processing to remove unripe, overripe, or damaged fruit, in order to enhance the quality and sweetness of the cup.

The coffee cherries are then pulped to remove the fruit and skin, and then graded by weight; heavier beans are superior quality and deliver a sweeter cup.

After grading, the parchment-covered coffee is fermented in tanks of clean water for 36–72 hours to remove the mucilage (sticky covering) by allowing it to ferment and detach from the coffee.

The coffee is then re-washed and graded again by density in washing channels and soaked in clean water.

Then it is passed through three drying stages. Skin drying for 3 hours, slow drying for 3 days under a plastic shade and final drying for 10–15 days on African drying beds based on weather conditions.

The dried coffee is then carefully hand-sorted, and defects if any are removed. It is also turned regularly to ensure that it dries evenly and consistently.

At midday, the coffee is covered to protect it from mid-day sun. It is also covered overnight to prevent damage from the morning dew.

Once the coffee is dry it is rested in parchment until it is ready for export.